Brendola is a Vicenza town of almost 7,000 inhabitants, less than 15km from theResidence la Mason. It is called “the door of Berici” because its territory extends between the plain and the Berici hills.

The territory is located on the western edge of the Berici hills, facing the Lessini, and is divided into two areas: the hilly and the flat. The hilly area, of volcanic origin, is occupied by woods, meadows and crops, mainly of vines. The flat area is divided into the central-western sector of the municipality and is wedged inside the hills. Land rich in water and springs, the main river is the Brendola, which collects the streams descending from the hills of the territory, then flowing into the Guà.

Of particular note and worth a visit is the Cathedral of Brendola, known as “L’Incompiuta”

The parochialism in Brendola was very harsh and the various factions of the country were often fighting each other. In 1926 the four parish priests of Brendola formed a committee to build a new church capable of uniting all the Brendolans under a single central bell tower (also geographically).

On 14 October 1928, Bishop Ferdinando Rodolfi arrived at Cerro, the area purchased for construction, giving his approval for the start of the works. Under the project of the architect Fausto Franco, the first stone was laid on October 3, 1931 and immediately the project made use of the union of the forces of many Brendolani from each hamlet, strictly volunteers, using the stones of Monte Comunale and the sand of Guà, proceeding with such haste that they asked the bishop for permission to work on Sundays.

In the summer of 1933 the erected columns were already visible; when the archpriest fell ill two years later, the work did not stop and the heads of the family continued to bring materials and build. On the top of the façade there is an imposing statue of St. Michael the Archangel 4 m high, sculpted by Giuseppe Zanetti.

The abandonment of the project.

In the middle of the Second World War, however, the construction site stopped without starting again, for reasons that are still not completely clear. The building, 28.5 m high and 1124 m² wide, remains unfinished one step away from completion, clearly visible on the Cerro hill, left to decay for more than 60 years, during which various projects have been proposed without any conclusion.

The singer-songwriter Fabrizio Tavernelli dedicated a song to Brendola’s Incompiuta in which it is described as “the cathedral that shows itself wounded in the face of its fall, the church from which darkness enters inexorably, with wild dawns climbing its body; an unfinished work that, faced with gaps, cracks and groping faith, seeks a light to rekindle it “.

It is possible to admire the Incompiuta from the outside, going to the adjacent square, in via Carbonara, in Brendola (in front of the town hall). 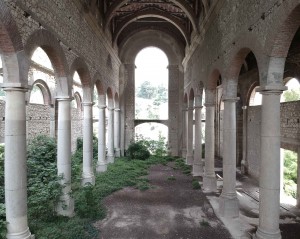 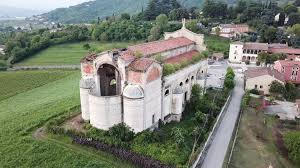