Where: Via VIII Febbraio 2, Padua. 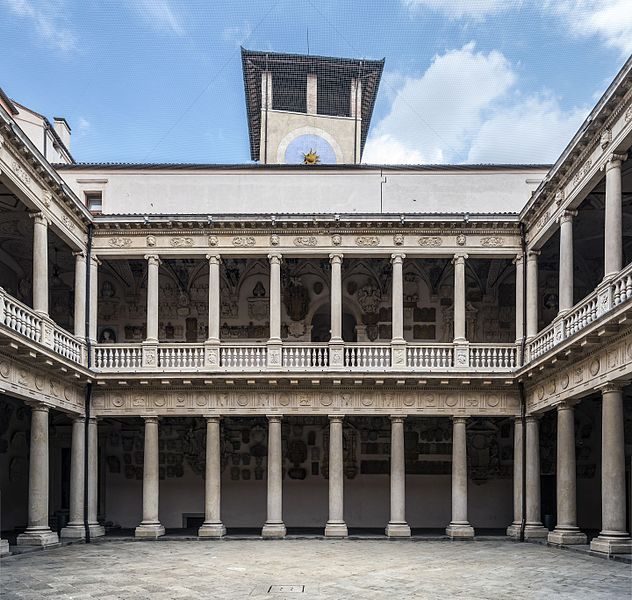 Palazzo Bo has been the main headquarters of the University of Padua since 1493.
Its history is rather curious: in the area where now the palace is located, there were three buildings, acquired in 1405 by a butcher who received them as a gift from the lord of Padua for supplying meat during the siege of the city. The butcher opened an inn there, called Hospitium Bovis, whose sign was the skull of an ox (bos, in latin). In 1493 the University of Padua acquired the inn: hence the name of the building.

The Palace gathers around the ancient courtyard, a loggia with a double order of columns, very similar to a monastic cloister. This courtyard’s peculiarity is that it is decorated with a considerable number of crests, which represented the families of those who studied and worked in the university. The crests also decorate many other rooms, including the Aula Magna, for a total of about 3,000 crests.

By a wide door forged with the bronze of the cannons of the First World War and bearing the names of the fallen students, you can enter the “Atrium of Heroes”, which leads to the Rectorate Gallery through “La Scala del Sapere”, a monumental staircase frescoed by Gio Ponti, a famous Milanese architect. To get an idea about the boardrooms and the Rectorate, you can check them virtually on Google Street View.

Another spectacular space inside Palazzo Bo is the Aula Magna, also frescoed by Gio Ponti. Even after the recent intervention, this vast room maintains the original sixteenth-century imprint and it is able to express both austerity and solemnity.

The Aula Magna is preceded by an antechamber called “Sala dei Quaranta”, because forty illustrious students of the university are represented, through emblematic re-enactments, on the walls. You will recognize, for example, William Harvey, the first who accurately described the circulatory system, the philosopher Nicolò Cusano and Niccolò Copernico, father of the heliocentric theory. The room also houses the desk that belonged to Galileo Galilei, who taught in Padua from 1592 to 1610.

But Palazzo Bo’s true gem is the Anatomical Theater, the oldest stable anatomical theater in the world, built in 1594 and still perfectly preserved. In the center of the room there is a dissecting table, surrounded by six rounds of walnut platforms, from where the students used to follow the anatomy lessons performed on the corpses of those condemned to death.

You can visit Palazzo Bo only with a guide. Visits are held in Italian and English, and they include courtyards, Anatomical Theater, Aula Magna, Sala di Medicina and Sala dei Quaranta (there may be exceptions in case of events or institutional activities), and they last about one hour and 15 minutes. Reservations are recommended, please call at 049.8273939.