Montebello is located in the province of Vicenza, on the border with the province of Verona, at the foot of the Lessini mountains. Its strategic position gave it a certain importance already in Roman times: it was built along the consular road Postumia, as early as 148 BC. it was a crossroads between Genoa and Aquileia. Our Residence was built as a place dedicated to the reception and refreshment of travelers. A Domus mansionis de Themplo, where the Templars found their seat (unique in the Vicenza area) to assist, accompany and support pilgrims heading to the Holy Land.

The collapse of the Roman Empire and the rulers

After the collapse of the Roman Empire, Montebello was dominated by Goths, Lombards and Franks. In the 14th century it passed under the dominion of the Scaligeri of Verona, who clashed frequently with the Carraresi of Padua, the Visconti of Milan and the Republic of Venice, which finally conquered and controlled the country from the 15th century to 1797. During the Campaign of Italy the country unwillingly hosted Napoleon Bonaparte, giving him shelter at the current rectory. In 1813 the Austrians arrived until the year of annexation to Italy, in 1966.

This Venetian villa located on the Montebello hill, with a property of approximately 18,800 square meters, has origins prior to the fifteenth century. It was owned by the noble Righi of Vicenza, who, around 1845, sold it to mr. Antonio Zanuso of Montebello. These, in the years 1847-48 gave it as accommodation to the workers who worked in the construction of the railway track. Soon she was reduced to a pitiful state, without labor and maintenance.

From splendor to abandonment

The ownership of the villa passed to various Counts and Marchesi, at the end it was then completely abandoned. Noteworthy are the three statues placed above the tympanum of the main facade, depicting Hercules in the middle, Mercury on the right and Saturn on the left. 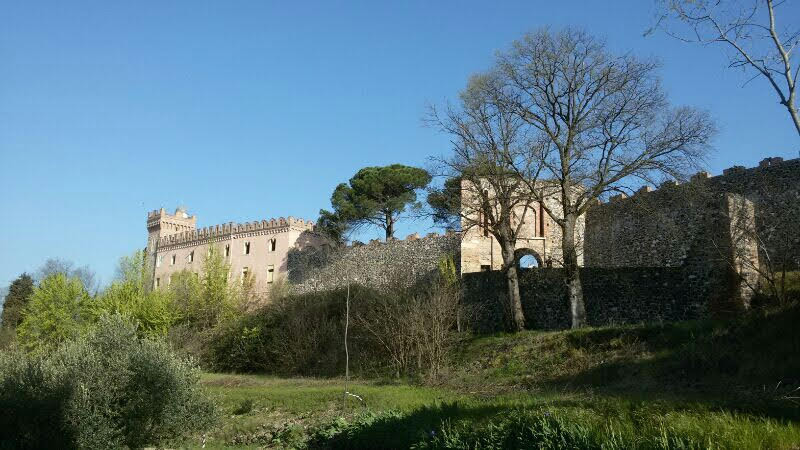 The first document in which the note of the castle of Montebello appears is from 1154, when Emperor Frederick I of Germany donated it to Alberto Maltraverso. A mandatory passage between Vicenza and Verona, the castle became a strategic place during the fights between medieval lordships.

In 1313 the castle passed to Cangrande della Scala which undertook a radical restoration and reinforcement.
Then passed from property to property to various local Noblemem, it has come to today almost in ruins. Some restoration works have recently been carried out, but the castle cannot be visited as private property.

From written reports it is said that the first procession with the statue of the Madonna was 29 July 1793 due to a great drought: the desired rain fell the same evening. Since then, whenever the people came to find themselves in similar need, they resorted confidently to the Virgin, who usually answered the fervent prayers of the Montebellani.

On April 26, 1885, the festival officially originated, when the inhabitants solemnly carried in procession the statue of the Holy Virgin seated with the Child on her knees, carved in lime wood in the second half of the 1400s. The procession was truly triumphant, floral decorations, green arches and multicolored torches dressed the town in celebration.

The provost Monsignor Capovin proposed to the faithful to renew that solemn procession in honor of the Madonna every 5 years, on the first Sunday of May.

Citizens have always considered this five-year solemnity an expression of faith, of intense devotion to Mary, of profound communion and belonging to the community. The town is dressed in blue and white decorations and flowers, people go out into the street and reuse themselves with joy.

This year the party will be held on Sunday 4th October

For any further information you can visit the web page http://www.amicidimontebello.it/, constantly updated with also historical articles related to our beautiful village.
2020-07-16T16:41:07+02:00July 16th, 2020|Holiday Ideas|

The cycle path from Montebello to Chiampo

For bicycle lovers, but also for the less experienced, we recommend a gentle ride along the cycle path on the banks of the Chiampo stream Directly from the Residence, using your own bike or renting one of ours, you can […]

The cycle path from Montebello…