The History of the Residence

The “Mason” of the Temple

The “Mason” in the Middle Ages, was an important stopping place in the journey to the Holy Land. This “mansio” situated along the Roman road “Postumia”, in the XII century changed its name to “Mason del Tempio” (Abode of the Temple) because inside its premises the Knights Templar had come to settle. The oldest evidence of the presence of the Templars in the Mason is in a document from the year 1189, which mentions a “hospital de Templo inter Gambellariam et Montebellum” (Temple Hospital between Gambellara and Montebello).

The Order of Knights Templar was persecuted by king Philip the Fair of France, and was suppressed by Pope Clement V of Avignon in 1312.

In 1319 the Order of Knights of the Hospital of Saint John of Jerusalem (or the Knights Hospitallers, that later became the Knights of Malta) is known to have taken over the Mason.

For this reason, the Maltese cross is found on ancient documents and maps of the area, and we choose to use it in our logo. 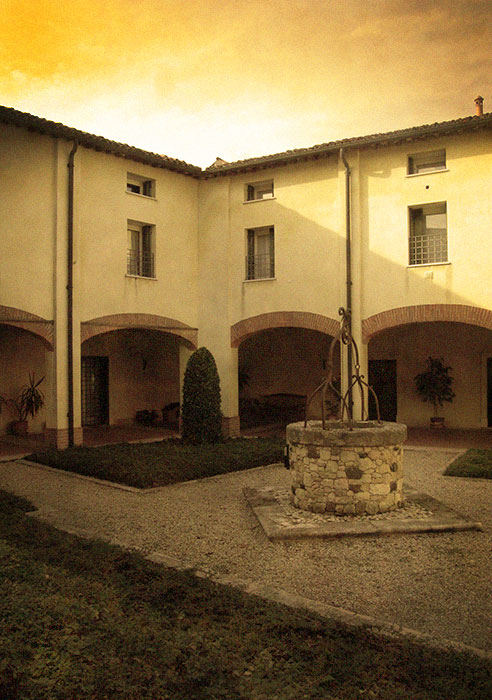 From the beginning of 16th century, the archivial documents show that the Mason was no longer used by the monks or the knights. What followed was a period of decline in which its millenary artistic patrimony was dispersed and defaced and which culminated in the great pillage on 8 April 1848 by the Austrians (battle of Sorio, during the First Italian War of Independence).

The general idea, that has inspired this recent project of restoration, was the absolute respect for the original building and artefacts. We have approached this work of preservation of the building with the humbleness, trying to avoid forced and showy interventions, but highlighting the original features of historical and architectonic value, thus preserving that mood that history bestows and which seeps from every stone.

Further information about the history of the building is available at the Residence reception desk.
CONTACT US

“There is only a single house, ancient, extremely old, it belongs to the landlord, whereas the Masone does not have any other houses except for this one placed over a hill and attached to the church, enclosed by walls.“